Finally, Nordstrom is open in Toronto! I was away on vacation when it officially opened but as soon as I had the chance, I went over to check out the Toronto Eaton Centre store, primarily for their beauty department!

And, I also bought a couple of items. 😉

It’s been a very interesting few years in the retail landscape in Canada. Right on the heels of the very disappointing failure of Target Canada, came the opening of higher end stores like Saks and Nordstrom. My SO and are what you would call “DINKs” – Dual Income, No Kids.  We live comfortably but are not into designer brands; however, we don’t want cheap quality stuff either. We live in the downtown core so we don’t drive much, and we don’t visit the suburbs or big box stores.  Where do people like us shop?  It seems that Hudson’s Bay (equivalent to Macy’s) is the closest “match” for me in terms of a department store.  I was worried that Nordstrom would be in line with Saks or Holt Renfrew but I was pleasantly surprised. 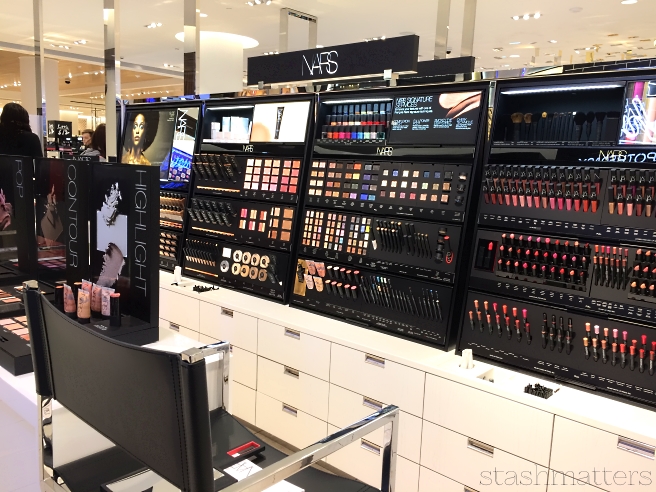 The beauty department is not set up like traditional department stores – instead of individual counters or islands, the brands are lined up side by side in aisles.  And the displays are all vertical, rather than flat. It was really easy to walk through and see everything all at a glance. 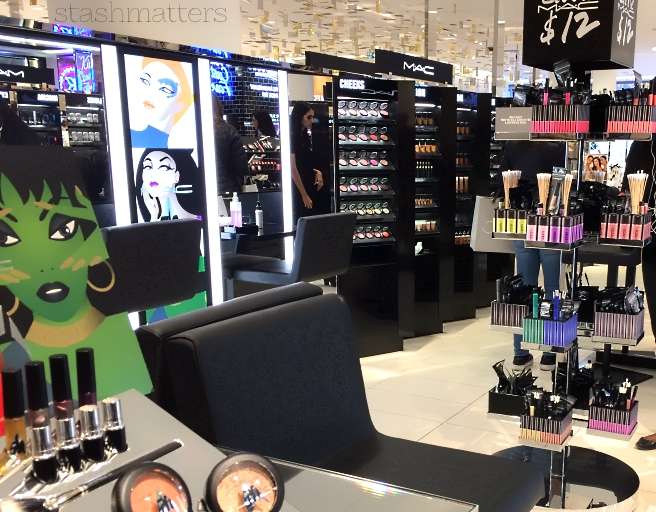 There are more brands at Nordstrom than those I listed – these were the ones I took note. I also noted they have a Sulwhasoo section, right beside La Mer. I’ve not encountered Sulwhasoo in the flesh before but have heard of it – it’s a premium Korean skincare line. But I didn’t investigate – just like why I didn’t look at La Mer – I have no business looking at $300 face creams. 😉 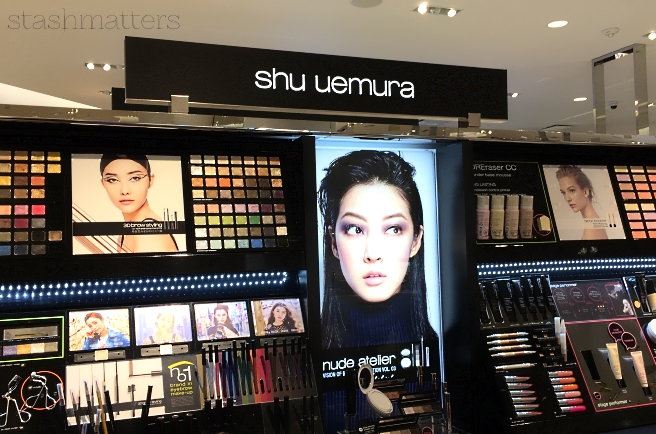 On the nail polish front (I specifically inquired!) they sell Deborah Lippmann and Butter London in a feature stand. There are also nail polishes within their respective sections: Burberry, Chanel, Guerlain, YSL and Dior. On the perfume front, they had a Jo Malone display – this is one fragrance brand I’ve been wanting to try for ages (any recs?) – I even mentioned it to my SO recently and he grunted something about “put it on the Christmas wish list, just tell me the exact name and a link to what you want”. 😛

The most unique section is definitely the SpaceNK aisle – it features cult favourite brands such as: Kevyn Aucoin, By Terry, Lipstick Queen, Tata Harper, EVE LOM, Oribe, Omorovicza, etc. I think I’ll be spending a lot of time (and money!) in this section.

For me, what sets the Nordstrom beauty department apart from Hudson’s Bay is how accessible and seamless it is. I don’t feel like I’m roaming from counter to counter, and I can freely play with products without being watched like a hawk. It’s a similar appeal to a Sephora store but without all the grubby testers and crazy crowds. 😛

Beyond the beauty department, I really liked the mixture of mid-to-higher end fashion brands. The shoe department is amazing! There’s also a candy shop (sugarfina), a bar in the men’s department, and a restaurant – they are definitely places “to be seen”.

So, what did I get?  These beauties:

I’ve actually visited Nordstrom twice now.  My first visit was a quick one – I was waiting for a friend and only had about 10 minutes to browse. But in that 10 minutes, I was able to do damage in the form of this Trish McEvoy Petite Kabuki brush:

It is so soft! But what’s more remarkable than the brush is the service I received. I asked to see this brush (the Trish McEvoy display has the brushes behind an acrylic case) and as soon as this brush hit my hands, I knew I had to have it. But, it was not in stock. The SA was apologetic and immediately checked the warehouse, then gathered my information – at first I said it was fine to ship to the store and I could pick up there but they insisted shipping to my place. The brush was on its way to me in no time – I received multiple emails advising where in transit my brush was –  I received it in 4 days (honestly, it was no rush, I did not have a makeup brush shortage emergency! 😉 ) And the SA followed up with me via a personal email to ensure I received the brush! If you know one thing about me: good service will win me over, every time.

My second visit was planned because during my first visit, I’d run into a familiar face. It was my Shiseido Lady! (that’s my official name for her) She is the reason why I am a Shiseido devotee – I basically trust her implicitly because she’s never steered me wrong. When she saw me, she actually HUGGED me – you know that means I’ve bought a lot of stuff from her. 😆 I vowed to return to Nordstrom to visit her at her new digs: she now not only has Shiseido, but also Clé de Peau (Shiseido owns CdP).  And so I went back and we starting chatting and she showed me some stuff from CdP. Well… you know how it goes. I’ve had it on my mind for years and now it is mine – behold, the cult favourite Clé De Peau Beauté Concealer:

I’ll do a thorough trial and will review soon-ish! 😛 Oh yeah, the nice thing about having an awesome SA is getting generous samples:

I don’t even want to know how much this stuff cost. Do not fear, I’m not going to succumb to the lure of Clé De Peau skincare – I refuse! I’m just so happy that I found my Shiseido Lady again! 😀 Interesting thing to note: she advised me that the SAs at Nordstrom can sell any brand – they don’t have to stuck to their own brands. If you know how cosmetics counters work (typically the department store and specific cosmetic brand jointly pay for the employees’ wages) the idea of one SA being able to sell you Chanel and Shiseido and MAC (all owned by different parent companies) is really novel. They’re cross-trained among the various brands. I love the idea of just dealing with my trusted SA. 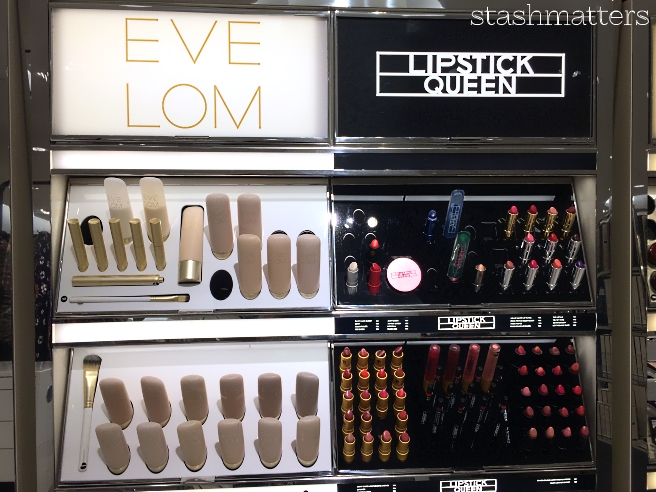 Then I had a nice chat with the lovely SA at the SpaceNK aisle. I inquired about this OSKIA Renaissance Cleansing Gel that Pores for Thought had gushed over, but they didn’t carry it.

What they did carry though, was EVE LOM, which I’d never tried before so she provided me some samples. I was also happy to finally come face to face with Kevyn Aucoin Sensual Skin Enhancer, and she shade matched me to SX 07 and provided a sample – I can’t wait to try it! 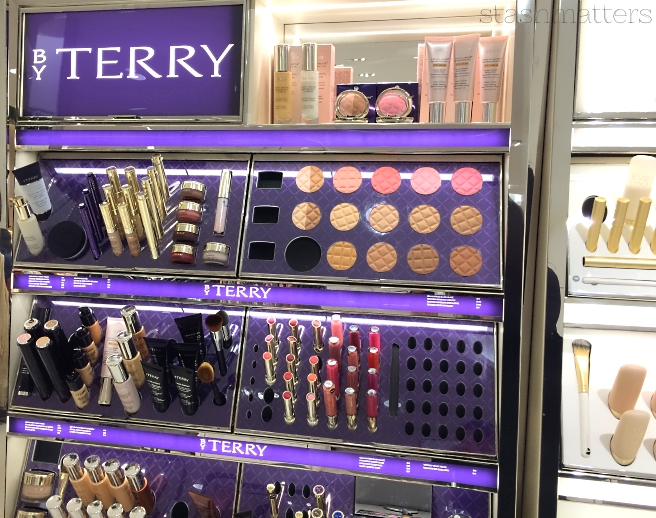 Two other brands from SpaceNK that caught my eye were By Terry and Lipstick Queen – I vowed to return soon to play around more.

One negative is that Nordstrom currently does not have a Canadian online presence – the American site does ship to Canada but the exchange rate is not favourable (for example, the Trish Mcevoy brush is C$57 in store and C$63 online).

There is a loyalty program at Nordstrom – for every dollar spent, they apply 1 point to your account. Once you accumulate 2,000 points, they give you a $20 gift card. A 1% rebate is not great but I was advised that they hold bonus points events, so I’ll be watching out for those.

I’m a Nordstrom convert! I feel like I now have an option besides Hudson’s Bay.  And, the newest Nordstrom store opened at Yorkdale Shopping Centre last week (along with MUJI), I can’t wait to check that store out too!

What about you? Which beauty department is your favourite?