I get a bit obsessive about discontinued makeup items.  I kick myself for not buying them when they were readily available.  And when they’re gone and difficult to acquire, their lure becomes even greater!  I start plotting ways to get my hands on them.  Enter eBay.  I know some people are uneasy about being off eBay but I’ve never had any issues – just do your research, if something seems to good to be true, it probably is.

In January I was lucky to find TWO discontinued items that I had put eBay alerts on: Burberry Sheer Eye Shadow in Pale Barley No. 22 and Hourglass Visionaire Eye Shadow Duo in Exhibition (Rosewood NO. 09 wasn’t on my original alert, it just came along for the ride 😛 ).  These were purchased in late January and arrived recently.

The Story of Burberry Pale Barley No. 22

I’ve been stalking Burberry Sheer Eye shadow in Pale Barley No. 22 since the day it disappeared off the shelves in 2013. I had purchased a couple of Burberry eye shadows from Holt Renfrew and quite liked them (Midnight Brown No. 21 and Mulberry No. 24). I passed on Pale Barley mainly because I already own – and love – MAC’s Patina. They’re supposed to be really similar, both mid-toned golden taupes.  But it gnawed at me, not having Pale Barley in my life.  Then all hell broke loose in the beauty community as Pale Barley was OOS (out of stock) everywhere. There was no word when it would be restocked – rumours of a reformulation started spreading. 😮 And then my worst fears confirmed: Pale Barley in the Sheer formula was gone, in its place, a new version of Pale Barley resurfaced in the form of the Wet & Dry formula (and renumbered to No. 102).

Not my photo – Source: Check out more of the differences here. The new Pale Barley in the Wet and Dry formula is a flatter colour without the golden sparkle of the original.  Boo. Hiss.  Here’s another photo comparing a bunch of the Sheer vs Wet & Dry formula. Rosewood is not too different between the old vs new.

I was having none of that! I needed the original magical fairy dust version.  And so I began my online stalking. The original Burberry singles cost $33. I was seeing some Pale Barleys listed online for $50-$60 each. And I was this close a few times to pulling the trigger but I held off.

And then it happened – in late January this year I saw a German seller selling a bunch of older Burberry items and behold, Pale Barley was among the offering. I snagged it, along with Rosewood No. 09 for a total of $62 CAD shipped! They arrived all in their original boxes and velvet pouch glory! 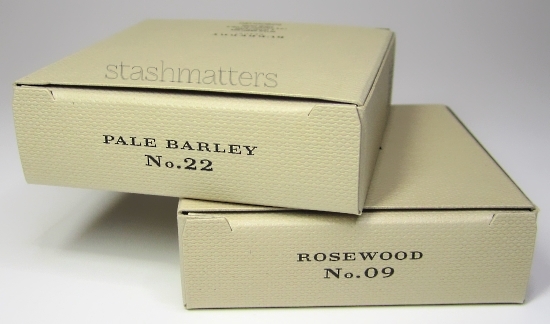 Rosewood has been on my “maybe”-list for a while (ever since I bought it for a friend for her birthday years ago – she has informed me that she hit pan on hers recently, because it’s one of the few eye shadows she owns, which is a completely normal way of living, I guess… 😛 ) because I know I have quite a few rosy taupey shades that are similar.  What’s one more? 😉 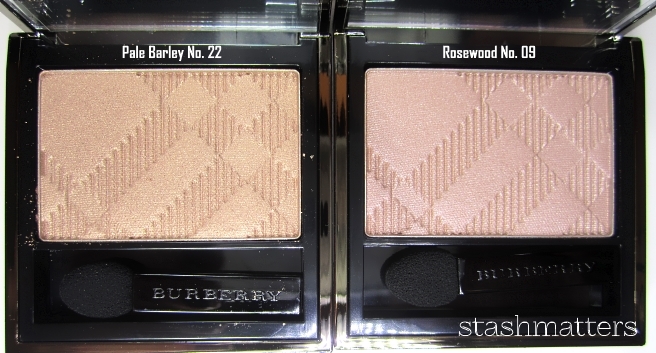 I’ve worn both colours now and I get the hype around Pale Barley! It really is a very easy, je ne se quois type of shade. Besides being great formulas, Burberry eye shadows contain a whopping 2.5g of product, vs MAC’s 1.5g. I should state that I have nothing against the new Wet & Dry formula, I just wanted the original Pale Barley. 😛

The Story of Hourglass Visionaire Eye Shadow Duo in Exhibition

This was just laziness on my part. I wanted this duo ever since I saw the amazing swatches on Temptalia’s blog – just LOOK at them! I had every opportunity to get the Hourglass Visionaire duo in Exhibition but at every Sephora VIB sale, I’d hold off or forgot about it.

Then early 2015, Hourglass launched the awfulness that is their Modernist Eyeshadow Palettes (I like my palettes to have clear delineation lines, thank you very much!) which on top of insulting my orderliness, were also poorly reviewed for pigmentation and quality.  And of course, the Visionaire duos quietly disappeared off store shelves, as they do.

Luckily for me, I was able to snag just the duo I wanted, for only $38 shipped!  It was new but without the box or the brush inside – I was totally fine with that. 😀 When I received it, the seller sent me a note to advise that she accidentally dinged my pan while packing it (EVER so slightly) and she included an Hourglass primer serum (10ml, which she lists at $16) for me as an apology. How nice!  The quality of these shadows are so dreamy – pigmented and blendable – makes me want to hunt down another shades in this formula.  Here are swatches of all the eye shadows:

I know you guys are going to say, “that Rosewood looks so similar to the left side pan of the Hourglass duo” so I swatched those two shades side by side on purpose for you! 😉 Rosewood is more taupe while the Hourglass is more lavender.  I’ll do a comparison post on both Pale Barley and Rosewood compared to other similar shades in my stash.

Do you have any of these items? What discontinued product do you want to hunt down?  (And just an update, I still haven’t received any of the stuff I ordered off AliExpress that I ordered in late January.)