So what’s it like to go on a 7-day cruise? I’ll admit that I’m not keen on all-inclusive resorts, or packaged vacations because I feel trapped. I do not like being herded around like cattle for meal time and activities. I know a lot of people who have gone on cruises and thoroughly enjoyed themselves, so we decided to give it a try.

We went on the ship Vision of the Sea, which is part of the “Vision” class of ships from Royal Caribbean. We chose the cruise line based on a lot of discussions with friends and the top 3 recommended cruise lines were Celebrity Cruises, Norwegian and Royal Caribbean. Celebrity Cruises was our top choice but it did not have any remaining sail dates for 2016 to the destinations we wanted.

I had jokingly said that I would name this post “Cruise Life for Type A Personalities” – I wouldn’t call myself a true “Type A” personality, but I do have some traits. It takes me a while to relax whenever we go on vacation. On a 7-day vacation, it probably takes me 2 days to stop pacing the hotel room, and then another 2 days to stop waking up at 6am. 😛 So how did I find cruise life?

Our ship had a capacity of 2,050 passengers and had over 700 crew members. It’s on the mid to small range compared to other ships but we were glad – I just couldn’t imagine dealing with the hoards of people constantly.  Note: this post focuses on life on the ship itself, not my vacation experience overall. We lived the “cruise life” primarily in the mornings and evenings, and the 2 full days we were at sea with no port stops.

• Being able to visit so many places in a relatively short period of time and at a reasonable cost (Venice, Dubrovnik, Ephesus, Santorini, Olympia). We estimate that if we were to travel by land or air to all these places, add in cost for food and hotels, it would have cost at least 25% more.

• Being able to sleep in the same bed / room for the whole trip. The bed and pillows were really comfortable as well!

• Having a private balcony – out of the 7 days, we ordered room service 4 times so we could take advantage of eating breakfast on the balcony. The sound of the ocean was also a fantastic white noise for sleeping! If we go on another cruise, we will book a room with a balcony, no question.

A big hunk of salmon. 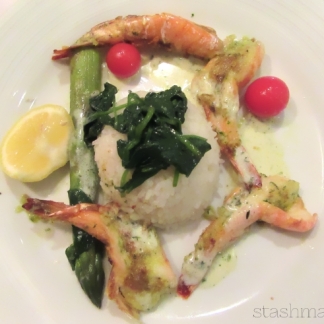 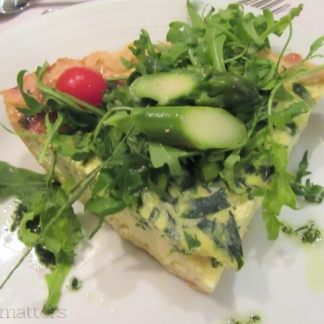 Quiche, one of my favourite foods.

• Variety and quality of food on board – they had themes for each night (Chinese,  British, Mexican, Spanish, Indian) and the overall quality of the food was very good. Definitely better than resort food. Side note: I heard an American cruiser ask, “What’s the difference between Mexican and Spanish food?” *smacks head*

• Option to sit by ourselves in the dinning room – I know, I know, that’s so antisocial. But we’ve heard horror stories of people being stuck at tables with people they didn’t like (tables are assigned and they’re the same for the duration of the trip). We experienced one uncomfortable instance of this when we went to the dinning room for breakfast (rather than room service or the buffet) and were randomly seated at a table with 10 other people – for that whole meal, no one spoke to anyone not in their own party. *awkward*

• Automatic flat rate daily gratuity ($13.50 per guest per day) made for worry-free tipping to restaurant and house cleaning staff.

• Check-in and check-out process was smooth and hassle-free. This is definitely not their first rodeo – they’ve fine-honed the process, provided guests with clear instructions, and were well staffed to handle the volume of people.

• Beautiful views of the ocean and sky especially at dawn and sundown. I do really enjoy being near water – I suppose that’s because I’m a Cancer in the zodiac? 😉

• Constant upselling! We felt hassled as soon as we stepped on board: drink packages, specialty restaurants, excursions, internet packages! We are not cheap people but we like getting value for money – we already paid thousands of dollars for the cruise, why are we looking to book $75 per person at an “upgraded” restaurant? Our waiter in the formal dinning room constantly tried to upsell us – so much so that we ended up opting out of eating in the formal dinning room in favour of the more relaxed environment in the buffet dinning room instead (they offer the same food, just not served to you or presented as nicely).

• Rip-off prices for internet. $13 USD per day for 1990’s dial up technology or $18 per day for high speed. Did I mention those prices are per day? 😮 We had already vowed to be “off the grid” for the trip but it just goaded me every time I saw the signs advertising the internet packages. On the last night, the SO insisted that we check-in for our flight while at sea but of course that cost money. Guess how much? $10 USD for 1 hour. We almost needed the entire hour for the simple act of checking in because of how slow the internet was. 🙄

• Activities and entertainment were not enticing to us. Cruising is really geared toward a more mature demographic, no matter how they try to market it as. We had no interest in the games, live shows or contests. We don’t gamble either.

• Formal evenings. On our 7-day cruise there were 2 formal evenings. We knew this in advance and I did pack a couple of dressier outfits and I was able to convince the SO to at least bring a sports jacket. But these cruise people took formal evenings seriously!  😮 They wore tuxedos and evening gowns and got professional photography done. That is so not our scene. We could have gone into the formal dinning rooms with the clothes we had but we didn’t want to feel uncomfortable, so we opted out of both formal evenings. We went to watch the Avengers movie on the big screen instead. 😛

• Noisy common areas. We were challenged to find places to park our butts on the ship that weren’t full of drunk obnoxious people. We wanted to find places where we could read or just chill. (And not to hide away in our room!) We spent a great deal of time at the indoor pool area – the outdoor (main) pool was super noisy.

• No one got left behind at any of the ports due to tardiness that we heard about. However, on the first day at port, there was a passenger who opted not to continue with the cruise due to health issues. And on the last day which was a sea day, we were advised that the ship had to make a slight detour back to Dubrovnik because one of the waiters suffered a heart attack. The captain kept us updated on his condition and advised us on the morning of deboarding that he was in stable condition, and that the the medical team on the ship basically saved his life! 🙂

• Toiletries are not provided automatically. I noticed on the first night that we had no shampoos or shower gels – these are not items I typically pack for trips since I assume they would be provided. So I rang up the Guest Services and they advised that these items were provided “by request”. Within 2 minutes, 2 young men came by with handfuls of various toiletries including shampoo, hair conditioner and shower gel. They do not provide body moisturizer though.

• I did over-packed clothes (but not makeup!) because I was really worried about the weather being hot and needing frequent change of clothes, but that didn’t materialize. I wished I had brought one warmer outfit – it got quite windy on the ship in the evenings when it’s full steam ahead. I had 3 outfits that I didn’t end up wearing.

• Neither of us experienced motion sickness – we had packed Gravol but didn’t need them at all.

• I learned a bunch of new terms: muster station & drill (emergency exercise), stateroom (another word for cabin / room), tender (small boat that ferries people from cruise ship to port if the ship isn’t able to dock at port due to shallow waters), gangway (the ramp where you get on and off the ship)

• The drink package was not worth it to us. Only coffee, tea, water and juices are included in the ticket of the cruise. Anything else: alcoholic (beer, wine, cocktails) or canned drinks (Coke, Sprite etc) cost additional. There is an option to buy unlimited drink package which is $55 USD per person per day. This would only be worth it if we drank a minimum of 7 drinks a day – no thanks. We were quite happy with the regular offering – our favourite was the lemonade! (which we now referred to as “cruise lemonade”) The SO did buy some beer and glasses of wine a la carte. I didn’t drink a lick of alcohol on the entire trip.

The last time I had alcohol, prior to the trip, the rash on my legs flared up (probably due to the blood vessels) so I didn’t want to risk it.

• We were warned about the abundance of food and the risk of gaining 3-5 lbs on the cruise. Not me! I instated the “Salad Protocol” in which lunch and dinner had to start with a bowl of salad. Then I ate whatever I wanted. Since I’m a carbs and dessert junkie, my plates often looked like this:

As my friend would say, it’s a plate full of beige food. 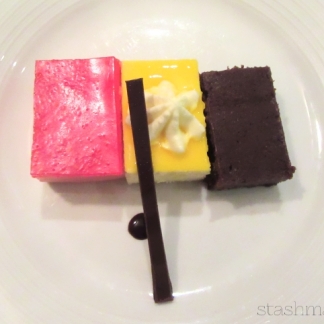 We were one meal shy of being hobbits! 😉

• I read 3½ books during the cruise! This is a feat in itself since I hardly ever read full blown books. The core books I read were all by female comedians – I’ll do a combined book review soon.

• I also knitted. Yup, I took knitting with me on the trip – I’m making socks. It’s a small project so it is very portable.

• Basically while on the ship when we weren’t eating or sleeping, I was either reading or knitting and listening to music on my headphones. The SO was content with lazing around on the deck chairs (he read 4 or 5 books, I can’t keep track. THICK books too!) but I wandered the ship on my own quite a bit just to walk around. I tried in vain to find stuff to buy at the duty-free shop – none of the makeup or jewellery appealed to me enough for me to fork over my Sea Pass!

The cruise was a means to an end. It got us from port to port but actually being on the ship didn’t hold a strong appeal for me. Read more about my overall trip here (photos) and here (my collab post with Joyce where I detailed our visit to Ephesus Turkey).

So, would we go on another cruise? Yes. We agreed that 7-days was our limit for cruising. And ideally we’d like to see multiple countries similar to how this itinerary was set up.

Have you been a cruise? How did you find it?

60 thoughts on “Cruise Life – My Experience”