When I hauled this item from Nordstrom in October last year, many of you expressed interest in seeing a review of this, so I prioritized it to test out. 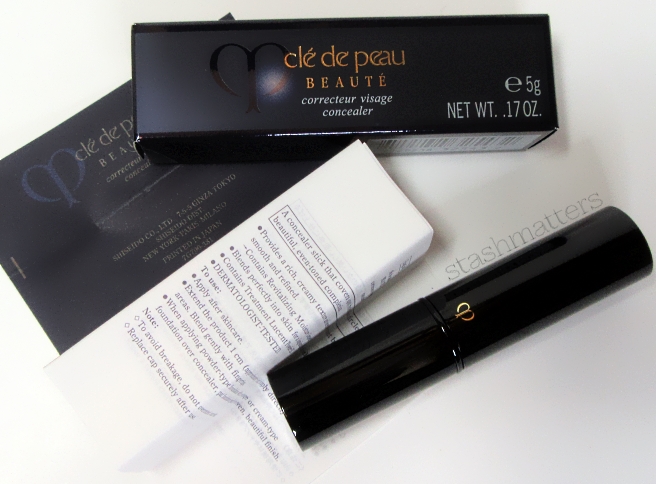 The Clé de Peau Beauté Concealer has been a long time lemming of mine. It’s supposed to be The Concealer to End All Concealers. So many people rave about it. The reviews stated that this concealer can both cover blemishes, hide redness and perform brilliantly on the under eye area – no small feat for a stick concealer.

First, let’s get this out of the way. This concealer is expensive. It cost  me C$88 ($70 USD). 😮 This is more than I’d like to pay for a foundation or face powder, let alone a little concealer. But, if it was going to be The One, I was willing to entertain the price.

I have the shade Beige.

I was with a bit of reverence that I opened the box. My first impressions of the concealer: it really does feel luxurious. The tube has a nice weight – it’s made of metal – and looks very upscale with gold lettering and a royal navy domed cap.

The colour match is not perfect for me – the SA did test both Almond (too ashy) and Ochre (too yellow and dark) so Beige was the best match. I’d say it’s about 85% match but it’s a bit dark and peachier than my skin tone. But the peachiness under the eye isn’t necessarily a bad thing.  I also noted that it does not oxidize.

To test the concealer thoroughly, I used it under my eyes (conceal dark circles), around my nose (conceal redness) and on my chin (conceal pigmentation, blemishes). It applies easily to all areas – it’s creamy, smooth and blends nicely on the skin. Despite my hesitation, it does perform well under the eyes without settling into fine lines or making the area look dry.  I prefer wearing is just on top of moisturizer – no corrector or primer.  However, it does fall short in several key areas: it’s not high coverage as claimed – I’d say it’s a solid medium coverage in terms of pigmentation. It also fades through the day – I definitely notice my under eye circles and spots peeking through by midday.

No review would be complete without a comparison on my blog! Here’s how the Clé de Peau Beauté Concealer compares against other stick concealers in my stash:

I mainly included the Vichy stick foundation to show the extreme end of coverage – that sucker can cover tattoos without breaking a sweat! It was not by accident that I arranged the concealers in this order – from left to right the concealer coverage decreases, ie. left is most opaque, right is most sheer. Here’s how I rate them against each other:

The Clé de Peau is less pigmented than the KATE and the Revlon – all 3 applied smoothly and felt fairly comparable on the skin. One thing that the Clé de Peau excels at is that it can be applied on top of makeup to touch up without looking like a cakey mess. From my stash, the only other concealer that can do this well is the MAC Matchmaster – this is why I keep that concealer in my makeup bag at work for emergency touch ups.

It is made in Japan and the ingredient list is as follows:

So you ask, is this worth $88? No, it’s not. Not to me. There’s absolutely nothing about its formula, colour, coverage, finish, or lasting power that makes it worth $88 in my opinion. It’s not 3 times better than the MAC. It’s definitely not 7 times better than the KATE or Revlon. In fact, my top recommendations from all of the concealers shown are the KATE and Revlon (their formulas are similar to each other – see my review of the KATE concealer here) and outperform the Clé de Peau in all aspects.  The Clé de Peau Concealer might be good for someone who doesn’t need a lot of coverage and have drier skin. And money to burn. 😛

Pros:
• Creamy consistency, easy to blend
• Not drying
• Does not settle into fine lines
• Does not oxidize
• Good for touching up, does not cling to dry patches
• Sleek looking metal tube

I’ve been wearing this concealer about twice a week for the past 4 months and this is how much I’ve used.  This concealer will last me a long time. I’ll likely put this in my makeup bag to use for touching up once I finish my MAC Matchmaster concealer.

In the end, while the Clé de Peau Beauté Concealer is a good stick concealer, but it’s not my HG. I don’t regret buying it – I’ve now “gotten it out of my system”, so to speak. I’d say that in my beauty discoveries over the years, I’ve only found a handful of items where the high-end products couldn’t be matched – I’ll do a post on them one of these days. 😉 Have you tried high-end makeup that haven’t lived up to the lofty expectations?