It may not come as a shock to you that I’m obsessed with lash curlers.  At one point I owned no less than 20 of them – I finally had to give a bunch away that didn’t suit my eye shape.

I’m not here to recommend a universal eyelash curler that will fit everyone, but as a general rule, I’ve found that curlers from Asian brands will better suit Asian shaped eyes (less curved).  The exception to this rule is the cult favourite Shu Uemura curler, which I find to be quite curved, with a similar curvature to Revlon and Tweezerman curlers.  I’ve since given my Shu Uemura away.  I was also disappointed that the pretty Anna Sui curler didn’t work for my eye shape – again, too curved.  Through trial and error, I’ve narrowed down the handful of eyelash curlers that I love. 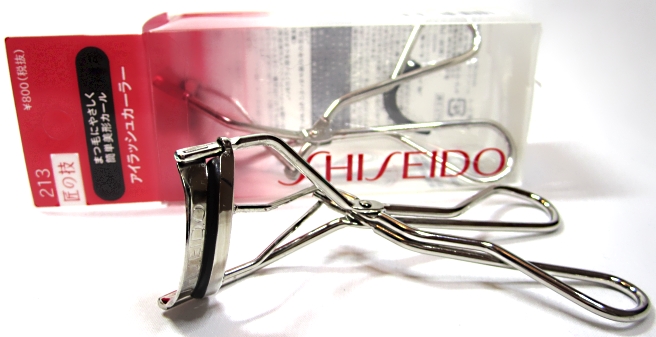 Shiseido original silver – this eyelash curler is discontinued in North America but a version of it still exists in Asia.  In my opinion, it is superior to the current gunmetal version, which I find to be too flat and pinches slightly at the sides on me.  The original Shiseido has the best curvature for my eyes, and it opens really wide compared to the Asia version.  I’ve owned this original silver one for years and I’ve put it in semi-retirement (I want to clone it!)  I did purchase 2 of the Asia version (in the red box in the above photo), but they’re not exactly the same as the original.

MAQuillAGE Eyelash Curler is the successor to my original Shiseido – it has a very similar curvature and works almost exactly like it.  It has a sleek gunmetal finish (not to be confused with the Shiseido gunmetal version!) 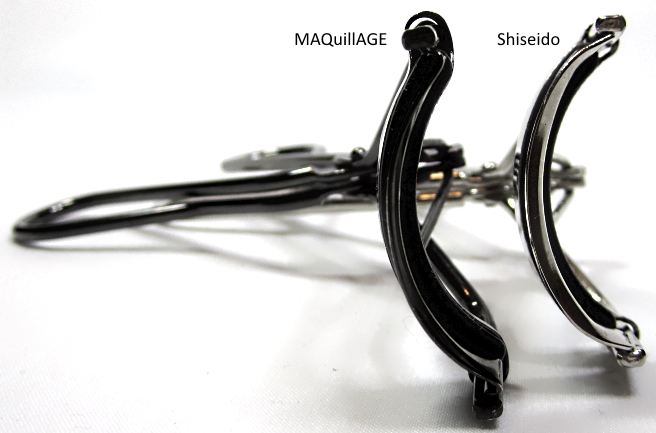 I suspect the MAQuillAGE design is the same as the Shiseido, since MAQuillAGE is is a Shiseido-owned company.  This is the curler I now use about 90% of the time. You can bet that I have a back up of this one!

Others worth mentioning that suit my eye shape are: Face Shop and Sally Hansen. I’ve gotten to a point that I can just look at the curvature of a lash curler, and I know whether or not suitable it’s for me!  I am curious about the Suaratt lash curler which is starting to get more hype online, and based on the curvature tracing, I think it might work on my eye shape.  If you’re interested, I will do a more in-depth analysis of all my eyelash curlers in the future.

In addition to curlers, I am also very picky about lash combs. They have to be metal teeth lash combs with very fine pins.  I’ve probably tried every major brand available!

Shishida Seishindo Metallic Mascara Comb – I first came across this at sasa in Hong Kong.  At the time, there weren’t many options available in North America with metal teeth as fine as this.  Even with new ones available, this remains my absolute favourite.  I like how neatly this folds up for travelling too.  I have 2 unopened back-ups of this!

Tweezerman has the sharpest metal teeth I’ve ever tried – they’re like needles! And the teeth are slightly farther apart than the Shishida Seishindo which makes it good for when I’m wearing a more volumizing (ie thicker) mascaras.  The only problem is that some of the pins on mine are loose and started to poke up so I have to keep pushing them back in – ouch.

Sephora released their version of the lash comb last year and it looks identical to the Shishida Seishindo.  I noticed that even Forever 21 has one – I couldn’t resist picking it up since it was so cute with the turquoise handle. 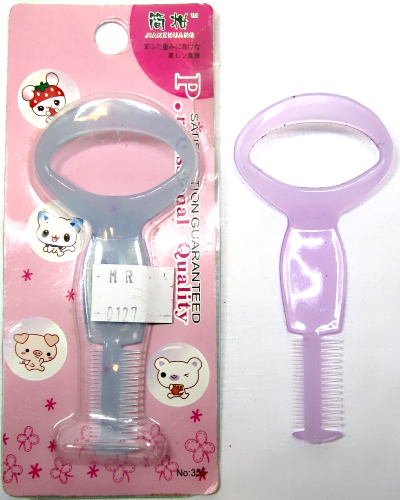 One last tool that I use in conjunction with the lash comb, is a mascara guard.  It’s a piece of plastic that helps to protect your freshly applied eye makeup while you’re combing your lashes (some people will also use this during the application of mascara but I’ve found it cumbersome).  Here’s a picture of how it is used, from the ebay listing where I purchased mine:

The version shown here a slightly different shape than what I have now – I started out with this more angular shaped version, but I’ve since found that the rounded version suits my eyes better.

That’s probably more than you ever wanted to know about lash curlers and combs!  What is your favourite eyelash curler?

And this concludes my “Lash Week”! I hope you enjoyed it! 😀