Today I’m looking at two affordable drugstore eye shadow palettes that I’ve been trying out for the past couple of months:

I received both of these from Rachael of Helpless Whist Drying blog who included both of these in her epic giveaway. I suspect that she’s a palette pusher and wants me to come over to the dark side… 😉

As most of you know by now, I am not a massive fan of pre-made eye shadow palettes. I just prefer smaller eye shadow formats – singles, duos, trios, quads, and quints are my comfort level. In fact, up until 2016, I may have owned just 4 “bigger” palettes (Shiseido Eye Color Bar with 9 shades and Kat Von D Ladybird palette with 8 shades were daunting to me). Now, suddenly my stash has exploded with all these BIG palettes, I’m not even sure where to begin! I’ve had these 2 palettes in my stash for months – they contain whopping 12 eye shadows each! 😮  That’s 24 shades to deal with. 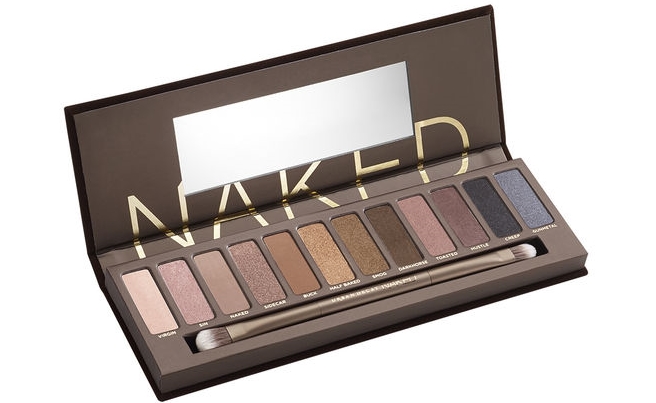 Also, a baseline: I do not own any of the Urban Decay Naked palettes so I do not have a point of reference. Clearly, both of these palettes are meant to take advantage of the success of all the “nakeds” and “nudes” at a cheaper price point. This post will be just looking at these 2 palettes in isolation – I won’t be comparing them against the UD palettes.

At first glance, I couldn’t comprehend the layout of this palette. I’m used to seeing all the lighter shades on the left hand side, and the shades should gradate to the deepest shade to the right hand side.

Turns out the Maybelline eye shadow palette development team had a few tricks up their sleeves – this palette actually can be broken down to be used as quads, trios, and duos (well the palette doesn’t physically snap apart into those – that would be a neat trick though). Here’s how they envisioned the palette to be used:

I like their way of thinking, and it helped alleviate some of the anxiety about how I was going to combine the colours. I didn’t adhere strictly to their “rules” but it did provide a good guidance for a starting point.  I decided to use the palettes as quads: 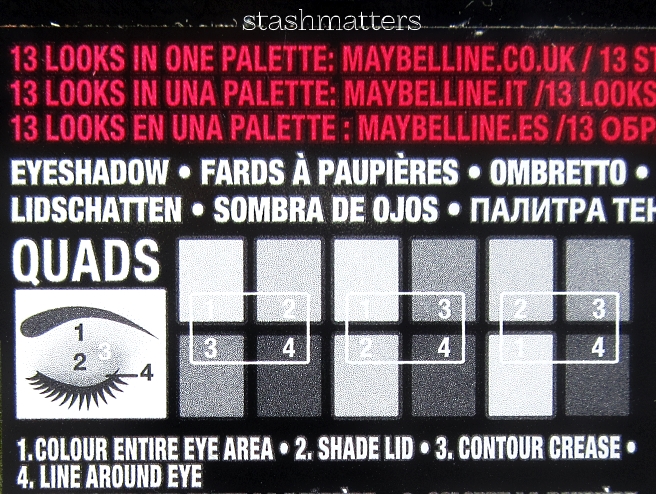 I have worn each of the “quad” looks – I named them: Neutral quad (left), Warm quad (middle), and Cool quad (right). My favourite look is the left section, the Neutral quad.

The formula is decent. The shadows feel smooth and plush, and apply with medium pigmentation and blend out nicely. As is the case with most eye shadow formulas, the shimmers / metallics outperform the mattes. There are 5 mattes, 4 shimmers and 3 metallics in the palette.

My favourite shades are #1, #4, #7, #10, and #9 in that order. Although there are a couple of mattes that could pass for transition shades, I found one too muddy looking (#5), and the other to be too dark (#8).  The main challenge I found with these eye shadows is that they tend to fade and crease on me – by the 6 hour mark I see noticeable breakdown.  I do wear my usual eye primer and base daily.

The palette does include a very lame dual ended sponge-tipped applicator:

It’s so short relative to the space provided. Why didn’t you provide TWO of them Maybelline? There’s enough space. 😛 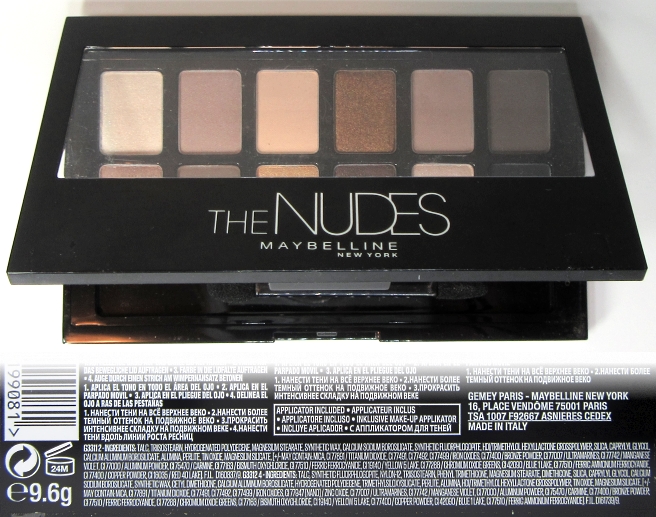 The Maybelline The Nudes Eyeshadow Palette contains 9.6g of product in total (0.8g each shade). And this palette is made in Italy!

This palette is more obviously “inspired by” the Urban Decay ones (I’m assuming Naked 2 or #200 or whatever version they’ve released now).

The long skinny pans had me concerned about whether my brushes would fit, but it turned out not to be an issue at all.

Unlike the Maybelline palette, there was absolutely no indication on how to create looks out of this palette. I just had to wing it! 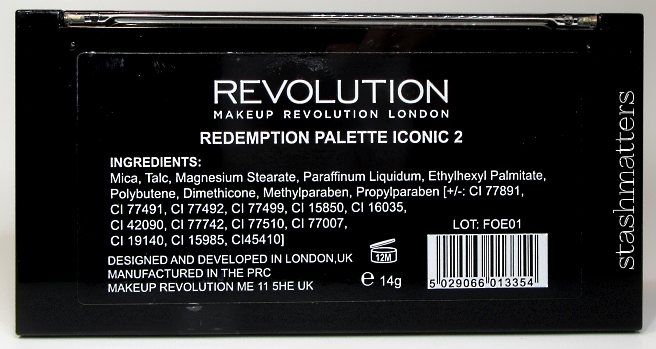 There are only 3 matte shades in this palette which meant I usually have to supplement other single shadows from my stash to create an eye look.

Most of the shadows are metallic so a light application was required – sometimes metallics cross over to frost territory on my lids.  The mattes in this palette are quite patchy, and a big miss for me was the lack of a matte transition shade.

The formula of these were “thinner” in the sense that they had to be built up, but once they are, the colours were true to pan and lasted well on my lids. Some of the colours look very similar to each other once they were blended out on the lids.  I did like that a few of these shades are what I’d call one shade wonders: I could sweep just one colour across my lid, blend out the edges and be done. 🙂

This palette also came with a dual ended sponge-tipped applicator but Makeup Revolution was clever, it made the handle super long so it looks more impressive. XD 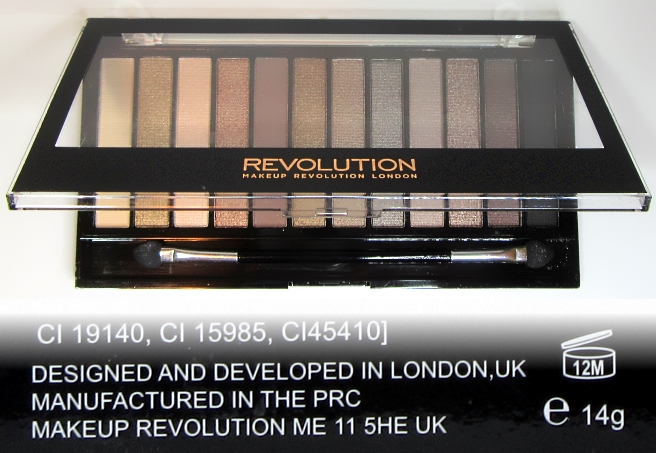 The Makeup Revolution Redemption Palette in Iconic 2 contains 14g of product which means each shade is 1.17g – this is close to a standard full size individual pan. It is made in China (PRC = People’s Republic of China).

While they’re both great palettes, I ended up preferring the Makeup Revolution palette slightly more than the Maybelline. The eye shadow formula of the Makeup Revolution just lasted better on my lids. I also found more shades that I would use regularly out of that palette. The plastic packaging on the Maybelline does feel a bit more sturdy, and its smaller size would be more suitable for taking for travelling.

One weakness in both palettes was the lack of a good mid-tone matte transition shade. To all the eye shadow palette developers out there – the transition shade should be the FIRST colour you put into a palette, it is the anchor. After that, add in your highlight colour, deep tones, pops of colours, whatever. 😛

Here are a few comparison swatches between similar colours from the 2 palettes:

For me, neither of these palettes are “go-to” complete palettes but they do contain some “de-pot-worthy” shades: that is to say I’d consider taking the effort (and risk!) to de-pot some shades to put into a custom palette. Those colours are: #1 and #4 from the Maybelline The Nudes palette, and #4, #6, #2, and #10 from the Makeup Revolution Redemption Iconic 2 palette.

What are some of your favourite affordable drugstore “naked” type palettes?